While they’ve never risen to the same “household name” fame as brands like Omega, Rolex, and Panerai, Oris is still a respected Swiss watchmaking brand in business for over a century and with a very impressive portfolio. Whether you’re a fan of bulletproof tool watches, vintage-inspired design, or you’re just a watch industry history buff, there’s a surprising volume of talking points related to Oris Watches. While there aren’t enough words and pages to cover every single facet of the brand in a single buying guide, today, we’re digging into the archives to give you a comprehensive look at the brand to help you purchase the best Oris watch for your wrist.

To help you better understand the Oris catalog, we’ll start with the company’s history. Of the many watch brands operating in the more entry-level range, very few have the same rich history as Oris. The company was founded in 1904 in Hölstein Switzerland, by Paul Cattin and George Christian, taking its name from a brook running nearby the town. The first 21 years of the brand’s operations involved extensive expansion, with six factory facilities opening by 1925 and employing over 300 people in Hölstein alone. By 1925, the manufacture also began migrating from the production of pocket watches into the world of wristwatches. In 1927, after the passing of George Christian, a very familiar name in watchmaking became a key player in the Oris fold. Jacques-David LeCoultre, who would then co-found Jaeger LeCoultre, became the President of the Oris Board of Directors.

As the years pressed on, Oris continued to forge ahead. The Oris Big Crown found its roots in a watch first produced in 1938, conceived for pilots who would often wish to be able to operate their watches while wearing leather gloves. Through the 2nd World War, Oris stayed afloat by focusing their production on alarm clocks. In 1952, the brand launched the caliber 601—their first automatic watch, displaying hours, minutes, small seconds, and a prominent power reserve indication at the 12 o’clock position. 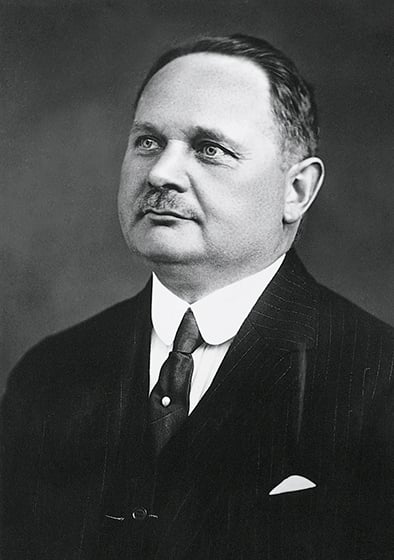 From there, we start to see some of the brand’s icons hitting the market, in particular a pair of watches from which Oris conceived two of its current reissues. Their first dive watch hit the market in 1965 with uniquely lumed Arabic numerals at 3, 6, 9, and 12, and was relaunched 50 years later as the Oris Diver Sixty-Five. Their Motor Sport Collection surfaced five years later, with the Chronoris chronograph at its core. A barrel-shaped case and bright orange accents complementing a utility-focused black dial oozed ’70s chronograph, an aesthetic that is continuing to fall back into favor at the present day.

1970 also marked the brand’s acquisition by ASUAG (the base that eventually evolved into the Swatch Group). However, this lack of independence was short-lived. By 1982, a management buyout took form at the hands of past proprietors Dr. Rolf Portmann and Ulrich W. Herzog. Though the brand was suffering because of the Quartz Crisis, the duo decided to abandon quartz watch production to return to mechanical watchmaking. Though these years were tumultuous, this vision allowed the brand to evolve into the firm position they hold in the industry today. 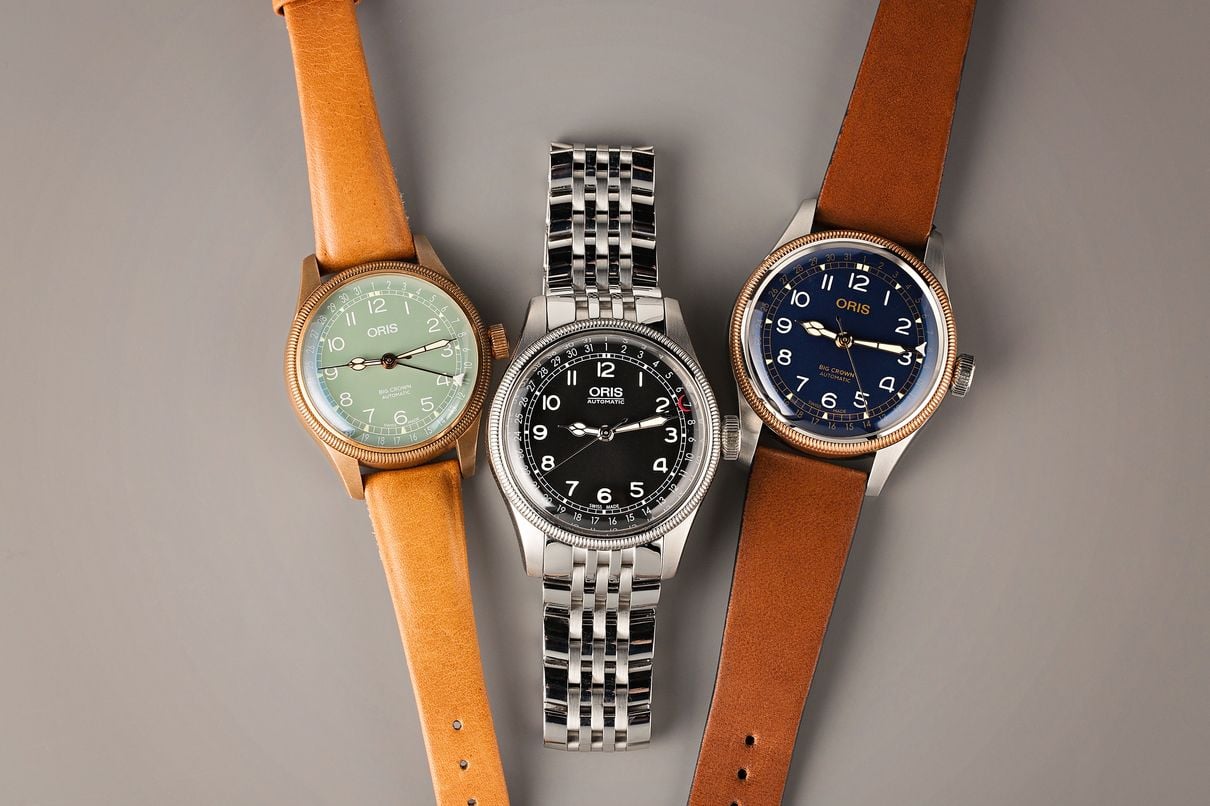 At present day, the offerings of the Oris Watch catalog are diverse and well-rounded. Splintered into four key categories—Diving, Culture, Aviation, and Motorsport—even within each category, there are a handful of design variations. 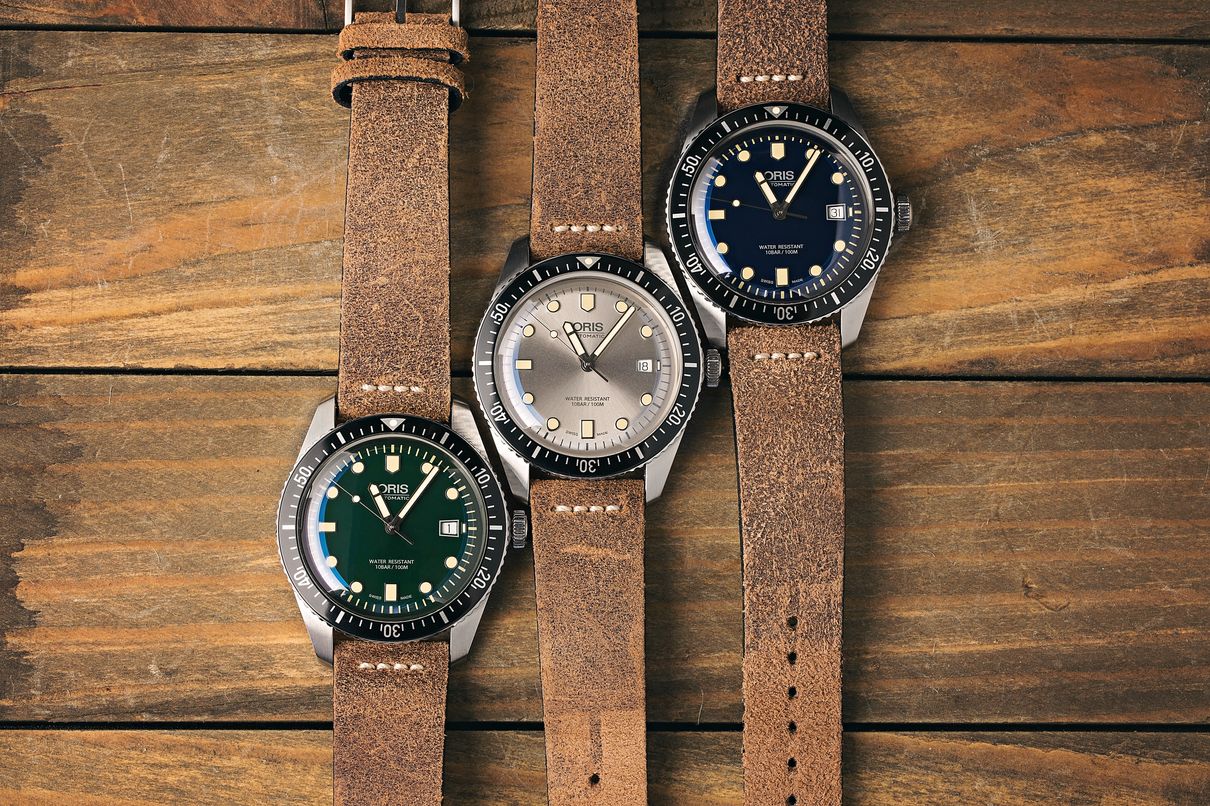 The diving series is a collection of purpose-driven tool watches, complete with waterproof cases, luminescent hour markers and hands, and reliable movements. It currently includes the neo-vintage Diver’s 65 mentioned above and the Aquis. There are countless variations within each of these collections, making it easy to find the perfect dive watch to suit your watch tastes and lifestyle.

The Diver’s 65 mirrors the design of the 1960s Oris diver closely, down to the design of the hour markers and hands and the font on the bezel. There are two primary dial variations, those featuring dot hour markers and those featuring retro Arabic numerals hour markers. Oris made significant improvements to the case when they released the modern iterations, featuring a uni-directional bezel mounting, a larger diameter, and an upgraded sapphire crystal, just to name a few. 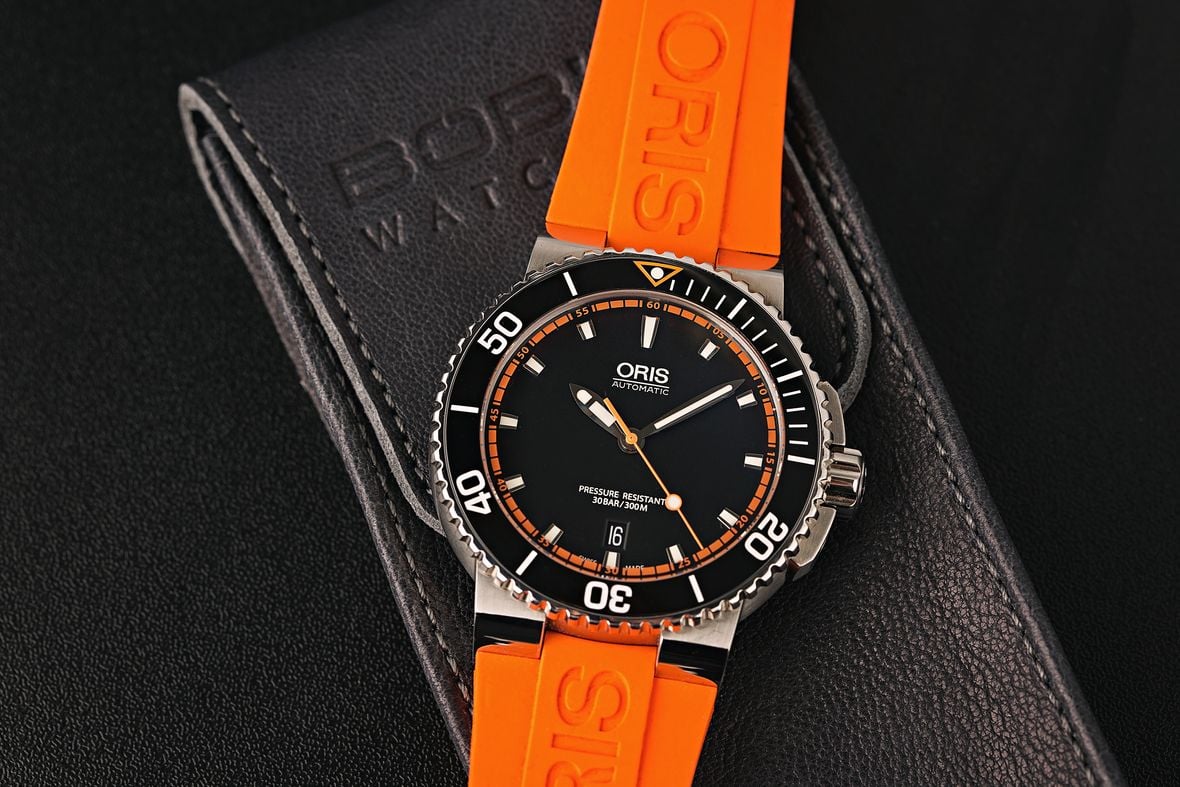 The Aquis is a contemporary diver with a more traditional dive watch aesthetic, including a 60-minute bezel and simple luminous hour markers and hands. You have your choice of various functions within this collection, including a date mechanism, an innovative depth gauge, Moonphase, GMT complication, and even a chronograph. The collection also includes metal or rubber bracelets, various metal finishes, and many attractive dial colors. If you’re in the market for a classic luxury dive watch, the variety and value offered by the Aquis are hard to beat. 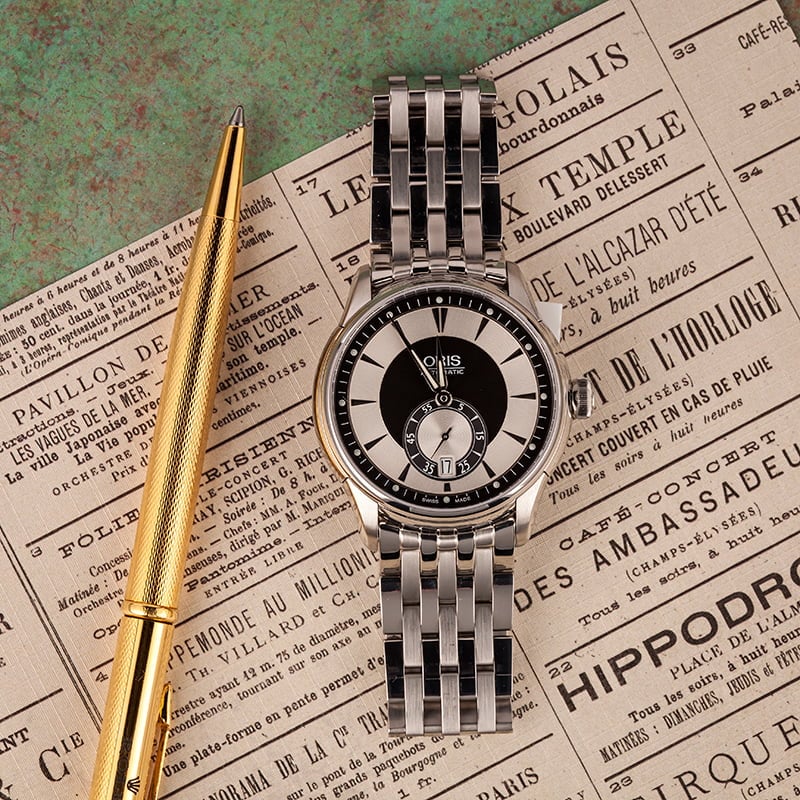 The Culture collection is entirely centered around dress watches, including a range of rectangular and conventional round cases, as well as a couple of cleverly skeletonized calibers. Currently housed within this collection are the Artelier and the Rectangular.

The Artelier includes several complications, with a common feature being a significant 10-day power reserve. In the affordable space, this is particularly uncommon. It’s a versatile collection, giving the wearer their choice of case size, dial color, metal or leather bracelet, and function. 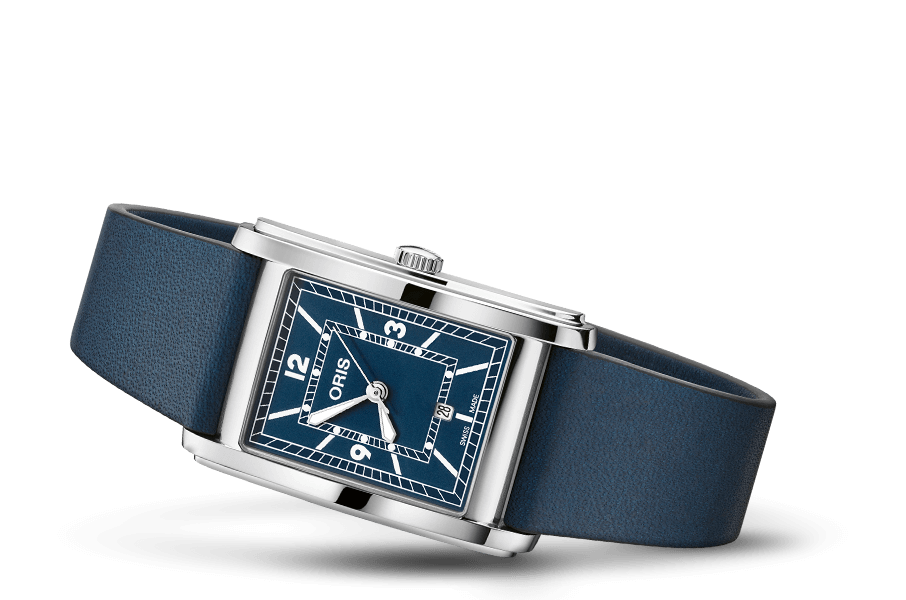 The Rectangular is a collection of striking, art deco watches in an array of vibrant dial and strap colors. The series outfits each watch with rectangular stainless steel cases on leather, self-winding movements with a date complication, and water resistance up to 30 meters. These watches are the epitome of fashion-forward watch aesthetic. 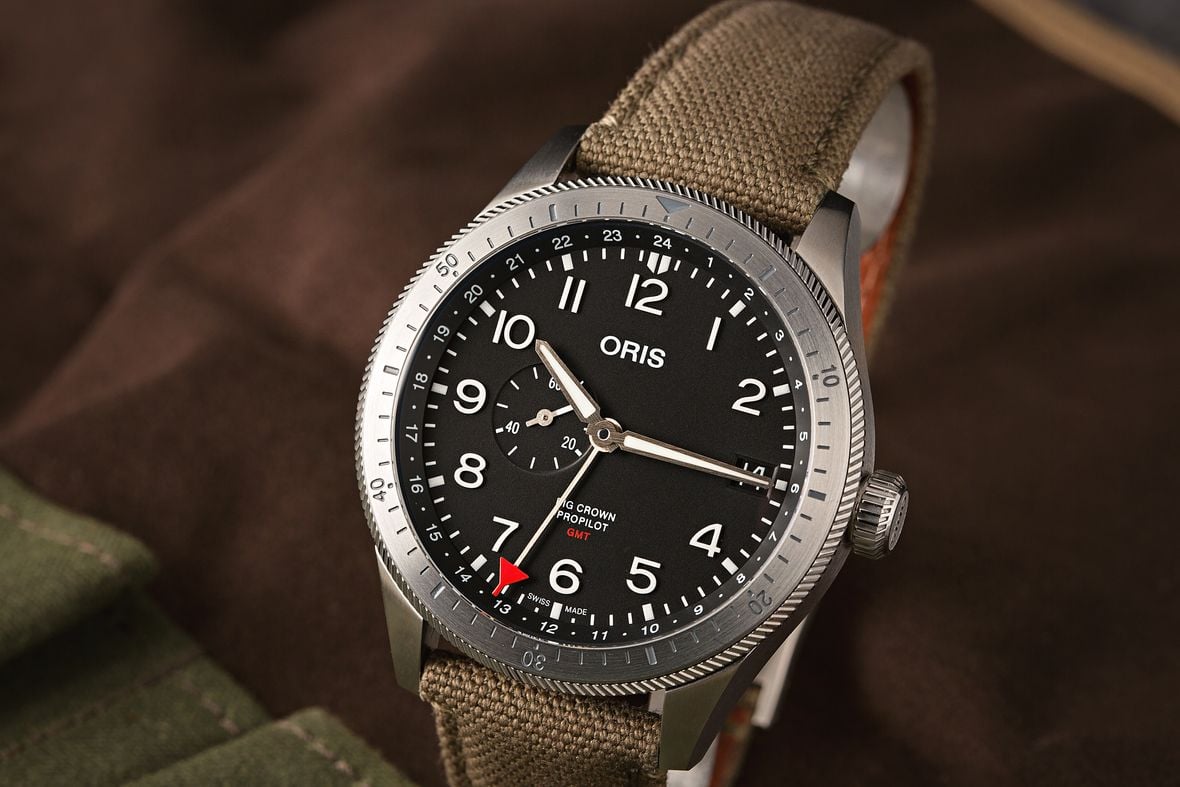 Nearly every name in the watchmaking game produces their own version of a pilot’s watch, and Oris is no different. Their current lineup has everything you need to keep perfect time anywhere on the globe, whether you’re traveling for business or leisure or piloting the plane yourself. There is a watch within the series for you. Models in the current lineup consist of the neo-vintage Big Crown and its contemporary iterations, the ProPilot and ProPilotX. Each boasts the collection’s signature oversized crown developed by Oris to be easy to manipulate while wearing pilot’s gloves. The collection includes several practical complications, including a GMT, chronograph, and even a handful of altimeter-equipped timepieces.

The Big Crown features the brand’s signature pointer date, which boasts a dedicated hand and a calendar scale circling the dial. Timepieces within the Big Crown collection are nostalgic in design and often feature a vintage-inspired cathedral hand. The collection is perfectly on-trend with a growing fascination for neo-vintage watches. 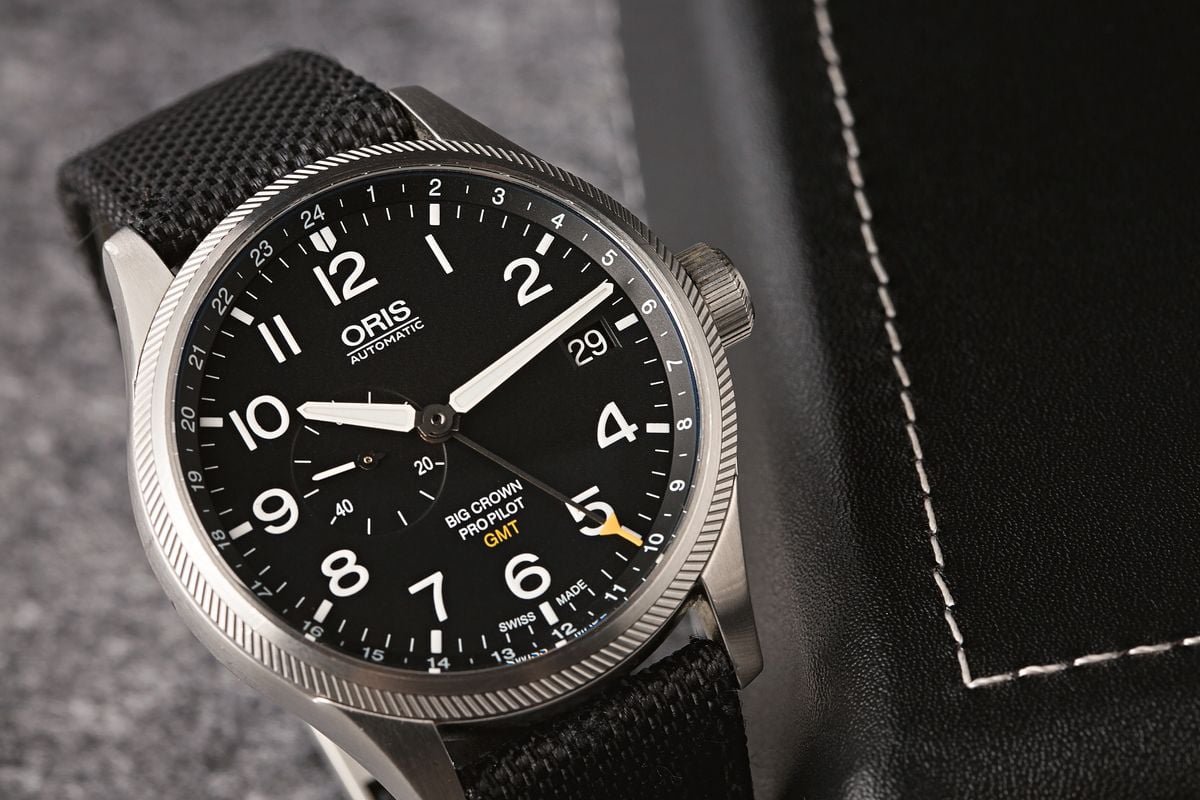 The ProPilot and ProPilotX will appeal to the modern collector seeking a wristwatch at the forefront of innovative luxury watch design. The ProPilot ranges from straightforward to more complicated design sets with optimal functionality and visibility at its core. On the other hand, the ProPilotX is all about aesthetics and is characterized by a striking skeleton dial revealing the movement within. Two ProPilotX references are available, one on a metal bracelet and one on rubber.

Although Motorsport no longer appears on Oris’ list of collections, it’s worth mentioning all the same because these watches are still very much available on the secondary market. The collection has two key highlights. One is a series of models created as part of the brand’s ongoing sponsorship of the Williams F1 team. The other is the Chronoris, the vintage-inspired chronograph series playing off the original ’70s model, complete with an irresistible tonneau-shaped case. 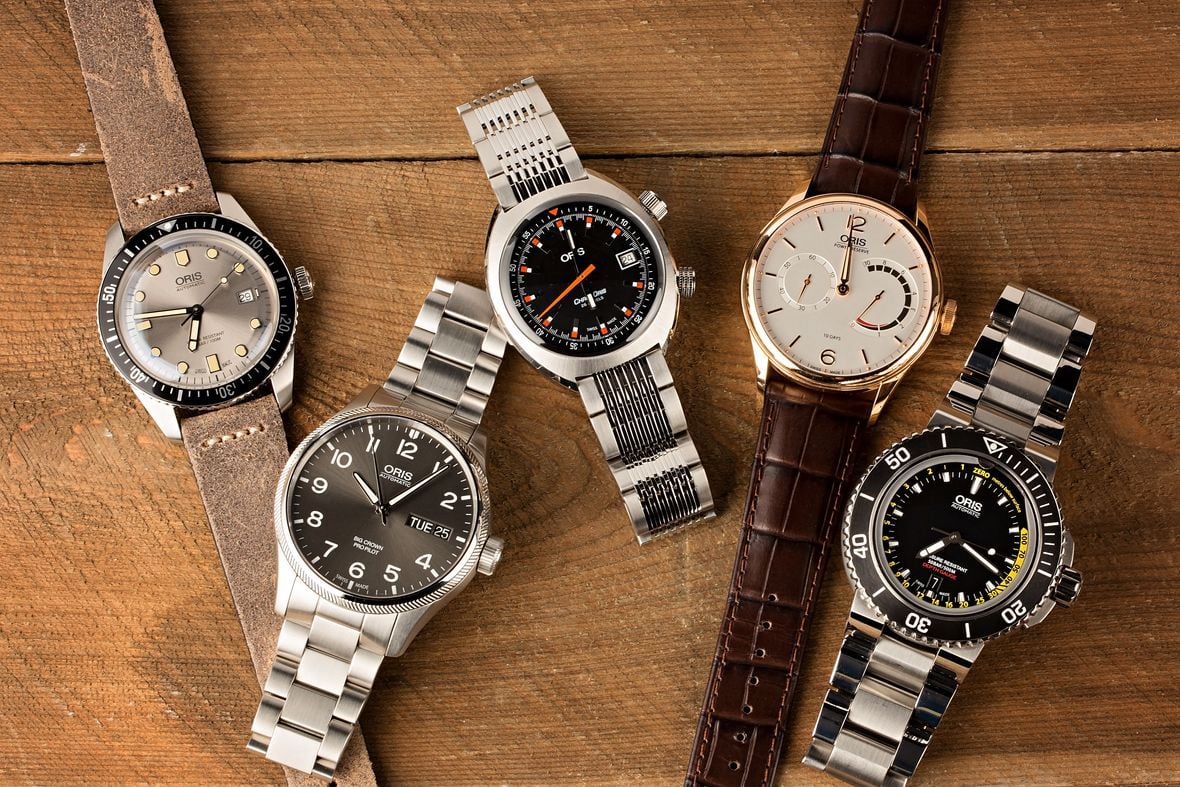 Rich history and diverse offerings aside, there are a few key takeaways that echo through all things Oris. First and foremost, value is king. Oris watches continually deliver significant value in an industry where price inflation has run rampant. You get a well-executed Swiss caliber, often based on Sellita or ETA offerings then tailored to the brand’s exacting specifications. Unique, clever, and thoughtful design is also at the core of the brand’s DNA. Whether we’re talking about the chunky integrated bracelets of the Aquis collection, the coin-edged bezels and big crowns in the Aviation collection, or the thoughtful dial layouts of the Artelier Caliber 111, 112, and 113 models, Oris’ design mantra bridges the gap between conventional and unorthodox.

What are your thoughts on the Oris brand? Let us know in the comments below.