In the wake of one of the most dramatic and hotly contested title fights in Formula 1’s history in 2021, fans around the globe are eagerly anticipating the start of the 2022 racing season and the unveiling of a new generation of cars – particularly for newly crowned World Driver’s Champion Max Verstappen and his Red Bull Racing team. With a new season of Formula 1 comes a new crop of tie-in timepieces, and longtime Red Bull Racing partner TAG Heuer has revamped its Formula 1 chronograph with an aggressive new look for the 2022 season. Nearly every aspect of the new TAG Heuer Formula 1 Red Bull Racing Special Edition has been revamped to reflect this year’s new generation of race cars, resulting in a fresh, athletic new look bursting with visual nods to the sport. 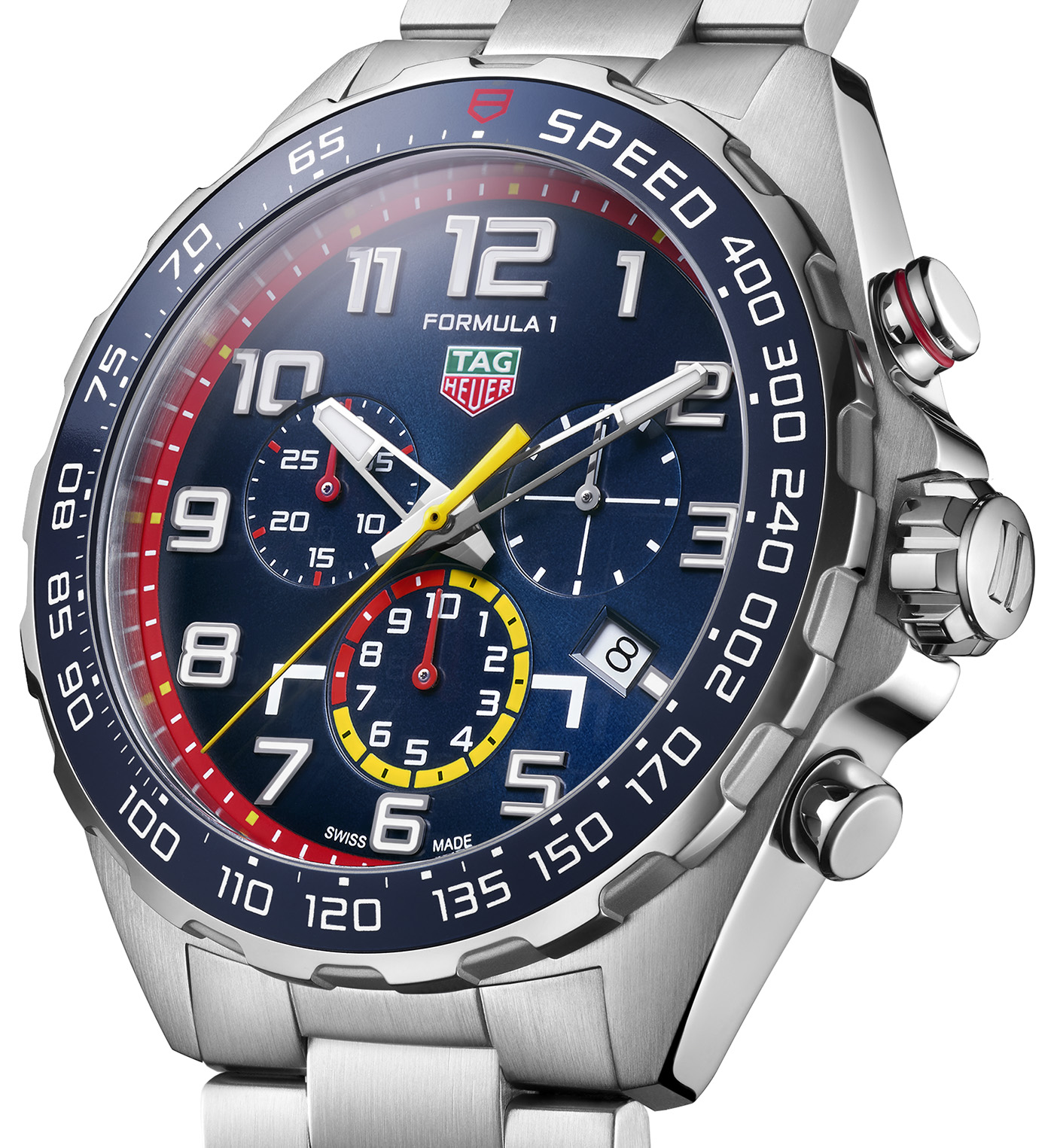 The clean and elemental 43mm stainless steel form of the new TAG Heuer Formula 1 Red Bull Racing Special Edition is shared with the rest of the Formula 1 line, but the brand adds a handful of special touches to set this one apart from the pack. The 2 o’clock chronograph pusher adds a vibrant red accent stripe, but the most extensive changes in images come courtesy of the tachymeter bezel. The heavy, gear-toothed bezel design is a Formula 1 series staple, but the tachymeter scale itself has been completely reworked. Rather than the bold, oversized numerals of previous iterations, the Red Bull Racing Special Edition reintroduces hash marks to the tachymeter scale for a more technical look in images that should allow for easier legibility. The red “Tachymeter” text at 1 o’clock has also been abandoned in favor of a simpler “Speed” marking in white, flanked by a red silhouetted TAG Heuer shield emblem at 12 o’clock. When taken as a whole, this reworked midnight blue aluminum insert gives the new Formula 1 a more functional, detailed feel, moving it away from the simplistic chunky styling of its predecessor. TAG Heuer engraves the solid caseback with a cleanly executed Red Bull Racing emblem, coupled with a classic checkered flag motif. Like other models in the Formula 1 line, the Red Bull Racing Special Edition offers an impressive level of durability, with a hefty 200-meter water resistance rating. 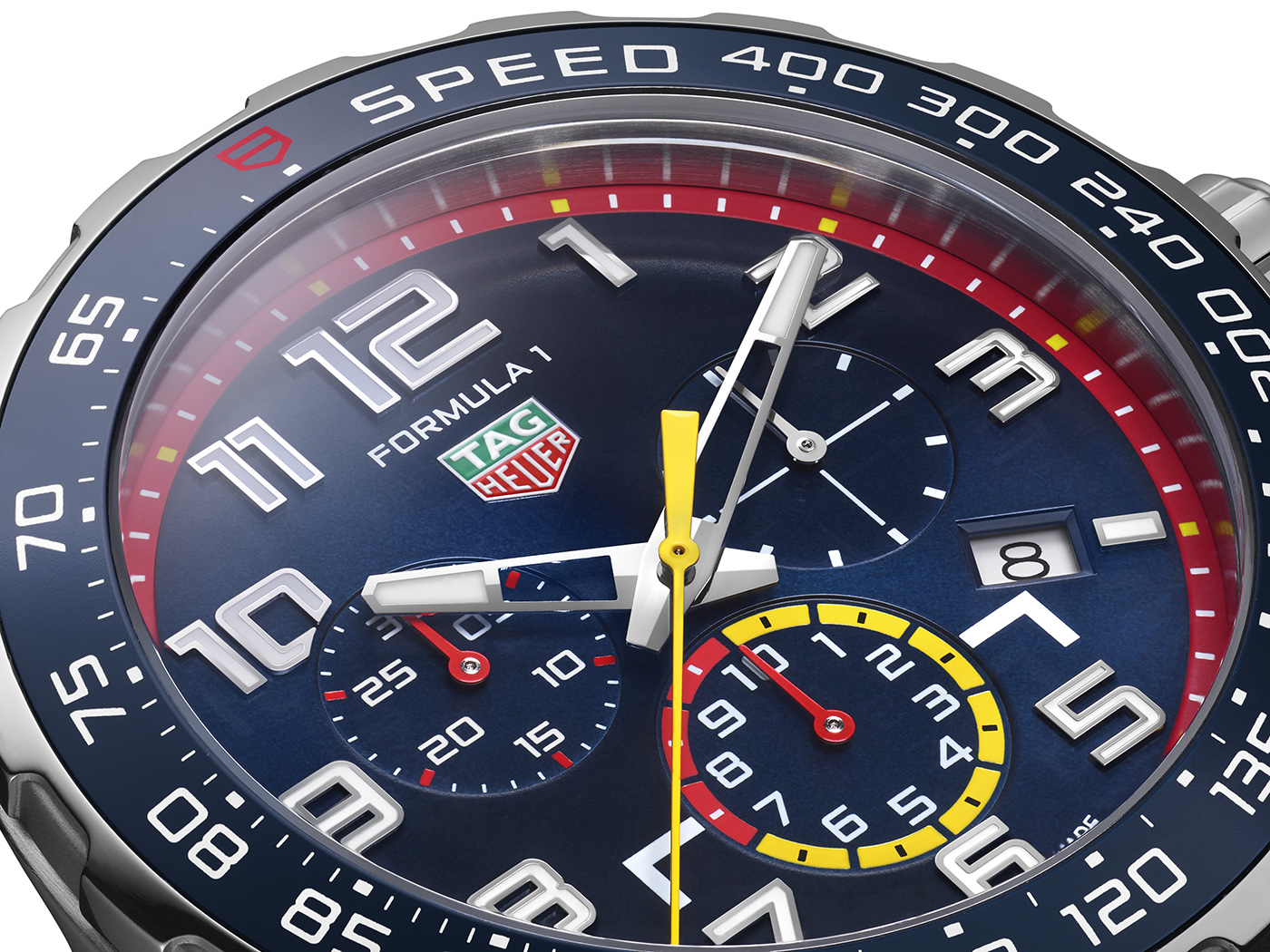 TAG Heuer’s most extensive changes to the new Formula 1 Red Bull Racing Special Edition come through in its dial. While the deep blue sunburst finish of the main dial remains the same, nearly every other dial element has been tweaked for this 2022 model. The simple applied indices of previous iterations are replaced by applied Arabic numerals, with a bold squared-off design supposedly inspired by modern racing dashboards (modern Formula 1 cars use a far less stylized digital display for vital information including RPM and the current selected gear, however). These new numerals are surrounded by a new outer chapter ring in Red Bull’s signature red and yellow color scheme. At 5 o’clock and 7 o’clock, this new design adds a pair of printed white accent markings, meant to evoke the look of the painted starting positions on a racing grid. In contrast to the most complex, technical look of the main dial, TAG Heuer takes a simpler, more graphic approach to the Formula 1 Red Bull Racing Special Edition’s subdials. Rather than the black subdials of the previous generation, TAG Heuer continues the blue base color into the subdials and reworks each subdial’s scale with a bolder, more colorful design. At 3 o’clock, the running seconds subdial abandons numerals entirely in favor of a minimal graphic scale, and the 9 o’clock chronograph minutes subdial’s bolder numerals and red accents make it an eye-catching addition in images. The 6 o’clock 1/10-second subdial is the boldest of all, however, with an outer ring in a punchy blend of yellow and red. Lastly, TAG Heuer replaces the tapering baton handset of previous Formula 1 models here, instead opting for a polished skeleton design that gives the dial a more complex, modern look in initial images. 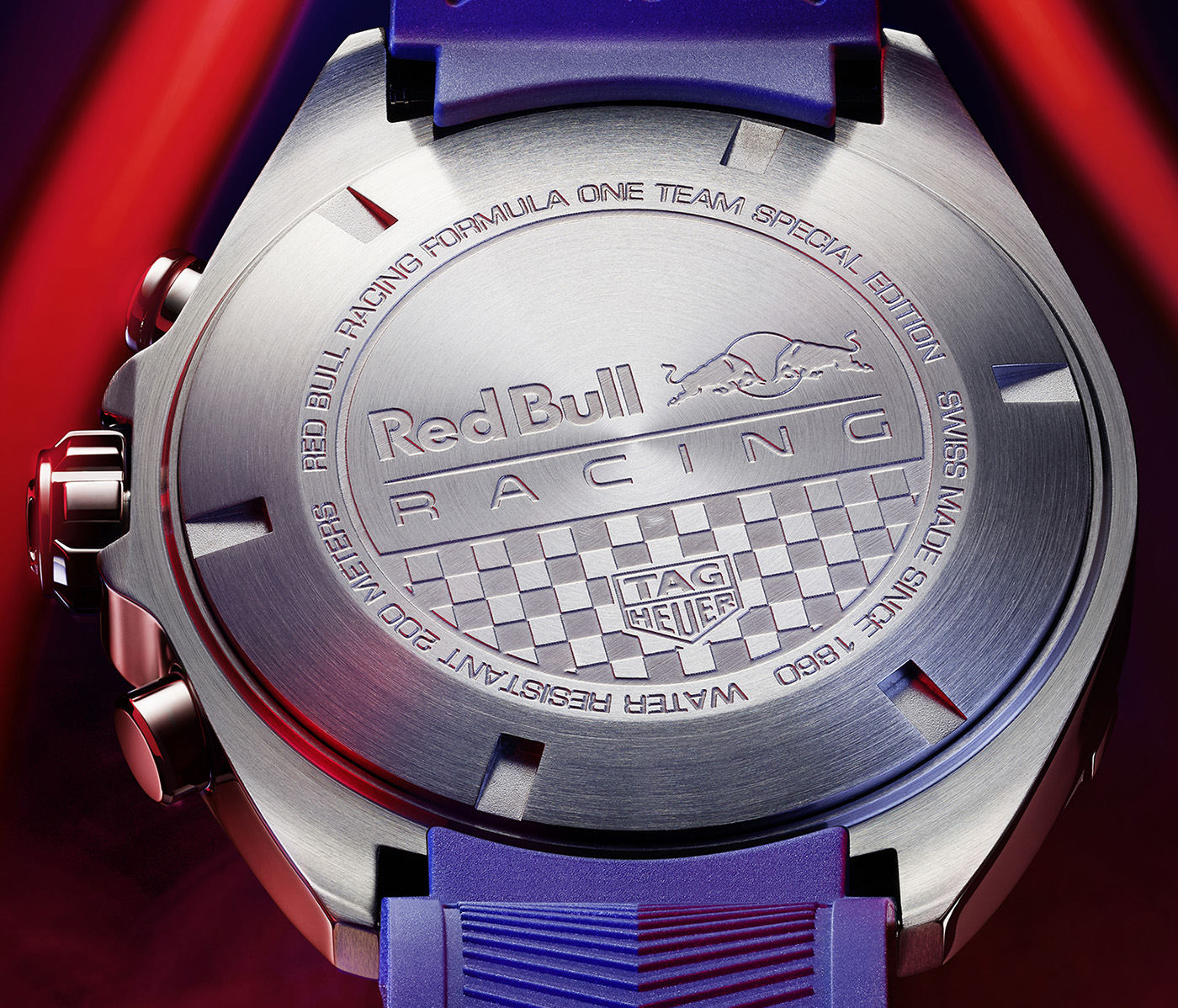 TAG Heuer powers the new Formula 1 Red Bull Racing Special Edition with the Ronda 5040D quartz chronograph movement. Affordable, robust, and capable of 1/10-second precision, the 5040D has been a mainstay of the TAG Heuer Formula 1 line for years, although it lacks the drama and prestige of the brand’s in-house mechanical powerplants. To complete the design, the brand offers the Red Bull Racing Special Edition with a pair of strap options. The first is a simple brushed oyster-style three-link bracelet in stainless steel. For those looking for a more contemporary feel, TAG Heuer debuts a new navy blue rubber strap design with this model, with a fabric texture and raised central stripe. 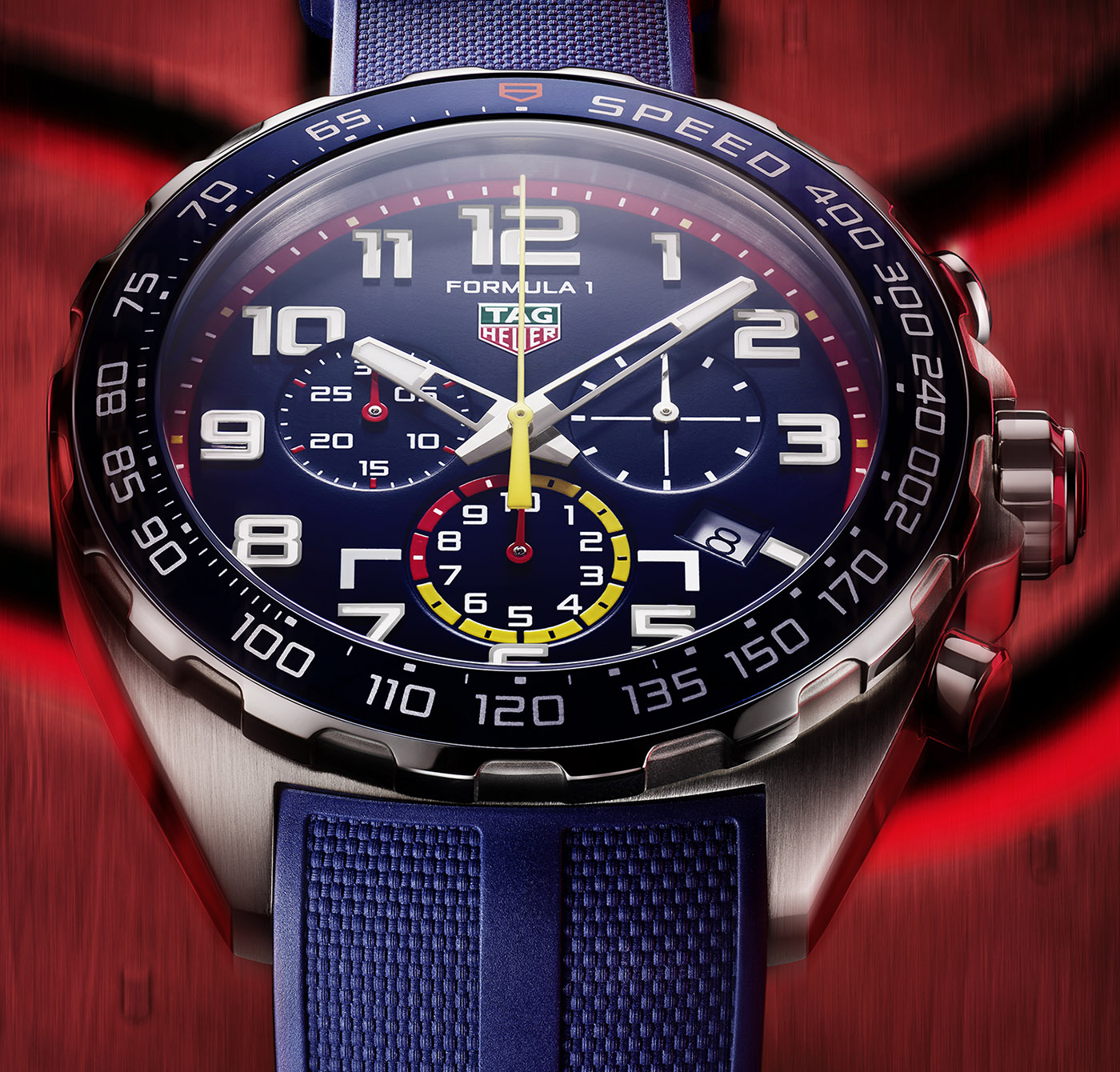