The first two models in the Casio G-Shock Digital Camouflage Utility Series build on the original square DW5600 form that launched the G-Shock line back in 1983. Measuring in at 42.8mm, these matte resin cases maintain the original G-Shock’s dimpled hooded lugs, ridged case sides, and octagonal bezels. Where these two models begin to diverge, however, is with color. The DW5600CA-8 coats this familiar form and its matching strap in a warm, pale putty gray hue as a base color for its Arctic camouflage motifs, but this muted color comes off almost grimy in initial images. By contrast, the DW5600CA-2’s slate blue case and matching accordion-style resin strap both form an effective base for the naval camouflage theme, and give this familiar design a reserved and masculine colorway in photos. Both models boast the G-Shock line’s standard 200 meters of water resistance, however. 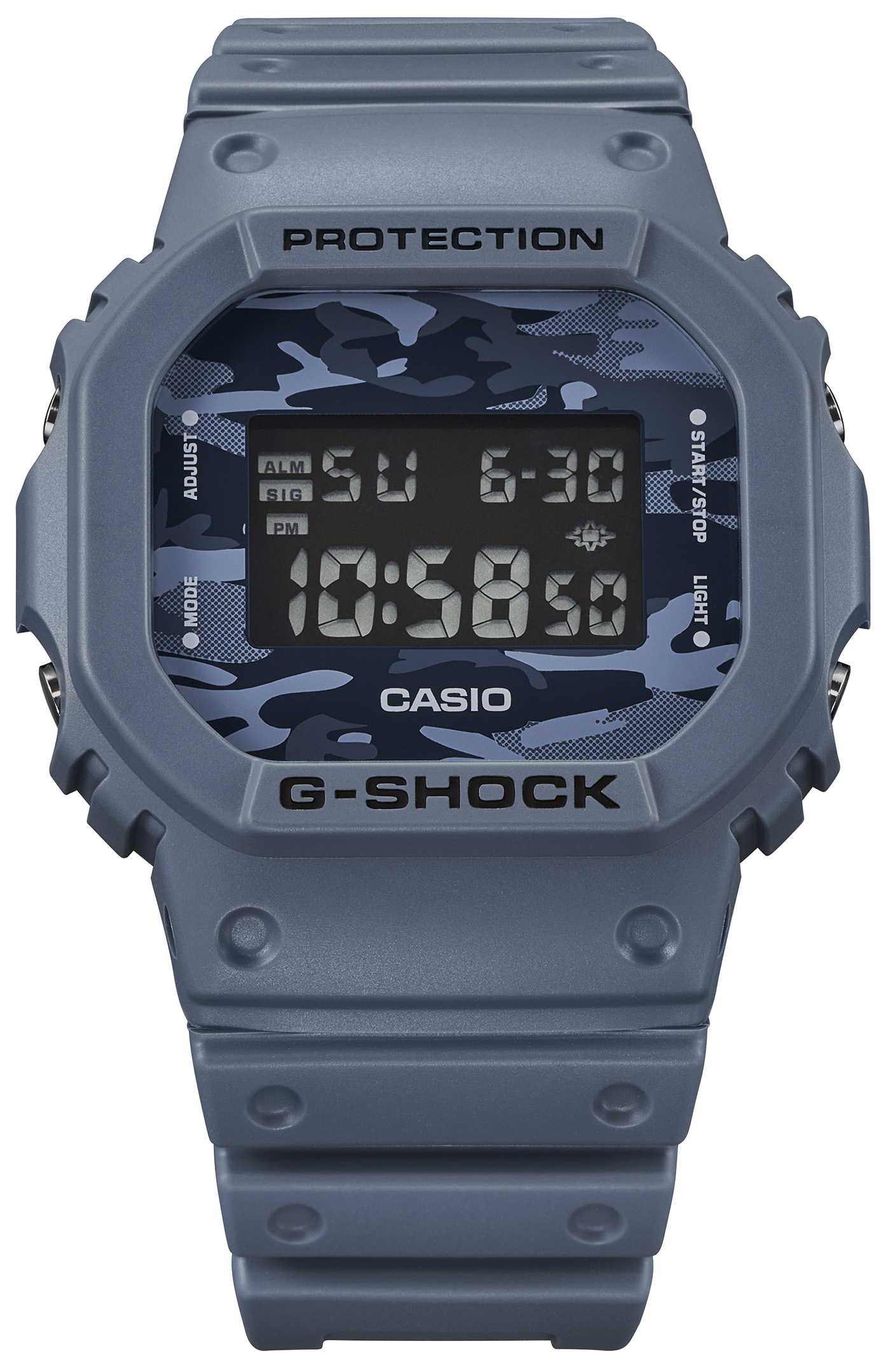 Ironically, none of the watches in the Casio G-Shock Digital Camouflage Utility Series actually feature digital camouflage. Both DW5600-based models, along with the rest of the series, instead use color-swapped variants of the rounded, irregular “Woodland” camouflage pattern instead of the more modern, pixelated look of contemporary digital camouflage as used by militaries around the world. For the DW5600CA-8, Casio uses a four-tone mix of off-white, charcoal gray, and medium gray to build an Arctic camouflage pattern on the broad inner bezel. The inner bezel on the DW5600CA-2 is equipped with a similar four-tone mix in shades of desaturated blue, giving the design a naval camouflage look. Both models use an inverted white-on-black version of the classic DW5600 LCD digital dial, for a darker, more aggressive look in initial images. Both models are powered by the in-house Module 3229 quartz movement, with the DW5600’s usual suite of complications including a 1/100-second chronograph, a 24-hour countdown timer, a multi-function alarm, an hourly time signal, and a perpetual calendar accurate until the year 2099. Stated accuracy for these models is +15/-15 seconds per month. 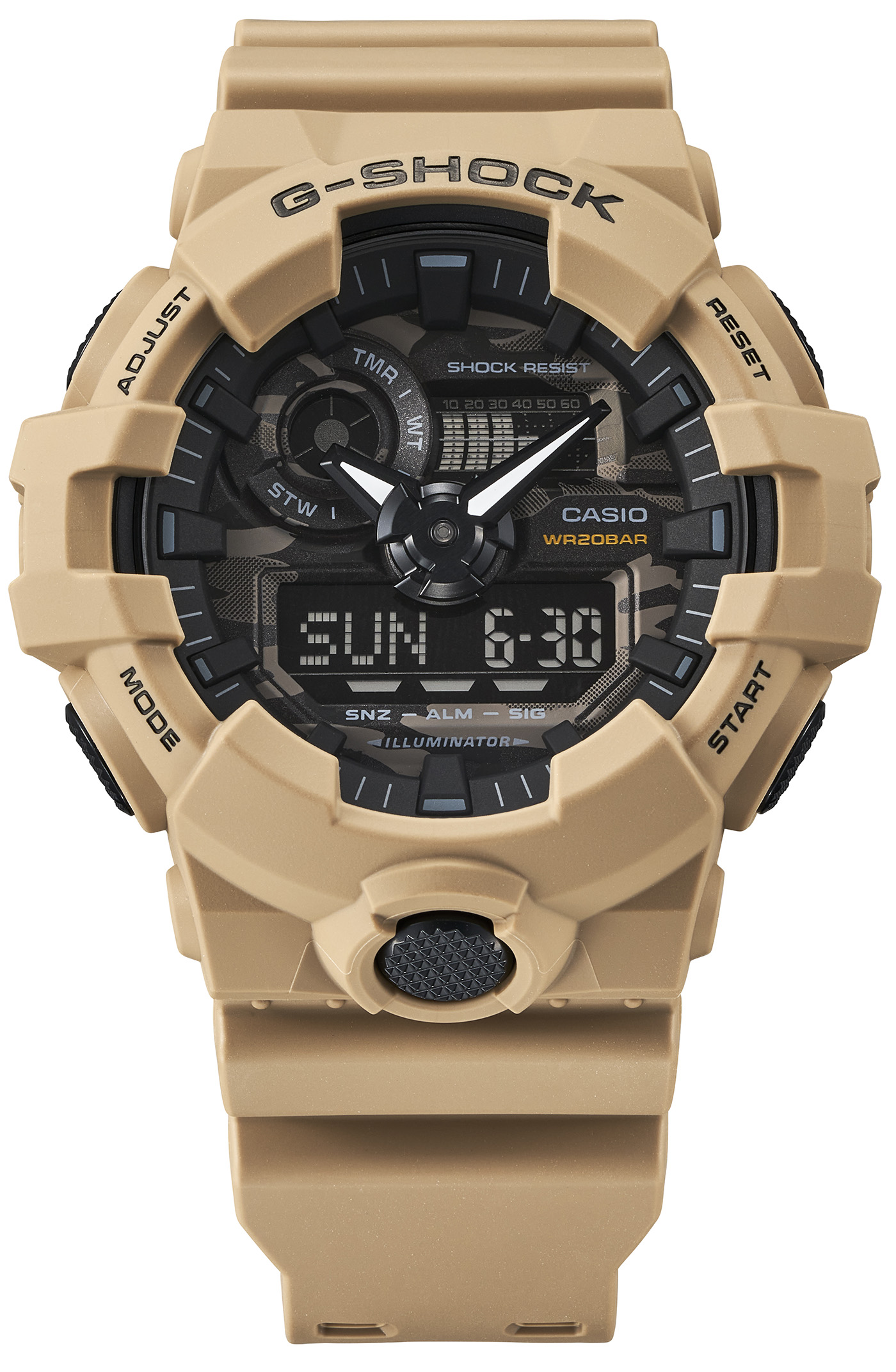 The beefier, more aggressive styling of the Casio G-Shock GA700 model family makes it a natural fit for the G-Shock Digital Camouflage Utility Series. Both the Casio G-Shock GA700CA-2A and the Casio G-Shock GA700CA-5A start with imposing resin cases measuring in at 53.4mm-wide and 18.4mm-thick. This bold sizing is coupled to an equally bold form, with oversized knurled black pushers and heavy claws extending over the smooth bezel that call to mind construction equipment in initial images. With such an aggressive look, the use of military-inspired colorways for the cases and matching resin accordion straps resonates well with the design in initial images. For the GA700CA-2A, the brand takes a darker, more saturated approach to the DW5600CA-2’s naval camo motif, and renders the main case body in rich navy blue. The GA700CA-5A takes a more directly military approach, with a case in army-issue sandy tan. Both the GA700CA-2A and the GA700CA-5A offer a robust 200 meters of water resistance. 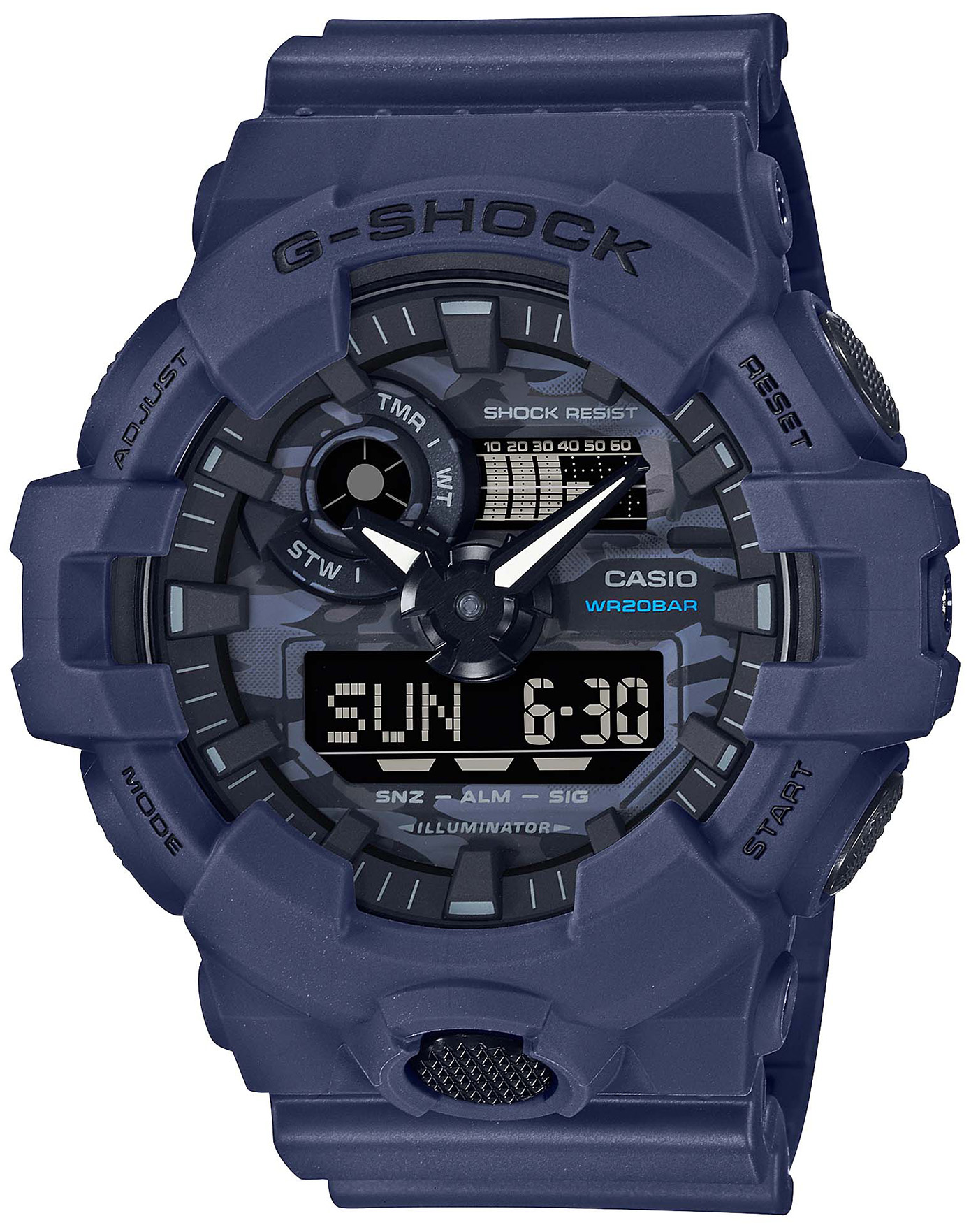 For the dials of the GA700-based models in the Casio G-Shock Digital Camouflage Utility Series, the brand continues the four-tone woodland-style camouflage patterns of the rest of the line across the main analog dial surfaces. Playing off the navy blue of its case, the GA700CA-2A uses an array of deep blues, grays, and black tones to form this camo pattern, and complements the design with midnight blue for the pointed hands, chapter ring, and tall wedge-shaped applied indices in initial images. The handset itself remains curiously undersized for the dial in images, but these smaller elements allow for a relatively unimpeded view of the digital subdials at 10 o’clock, 2 o’clock, and 6 o’clock. The GA700CA-5A follows the same layout but opts for black dial hardware and a series of tan, gray, and black shades for its desert camouflage pattern. Like the rest of the line, both models use an inverted color scheme for their LCD subdials, which helps these elements to blend in more readily with the surrounding camouflage texture. The in-house Module 5522 quartz movement inside both models is shared with the rest of the GA700 family and provides a broad spectrum of complications. This includes a world timer, a 1/100-second split-seconds chronograph, a 60-minute countdown timer, five daily alarms, and a perpetual calendar accurate to the year 2099. The Module 5522 carries a stated accuracy of +15/-15 seconds per month. 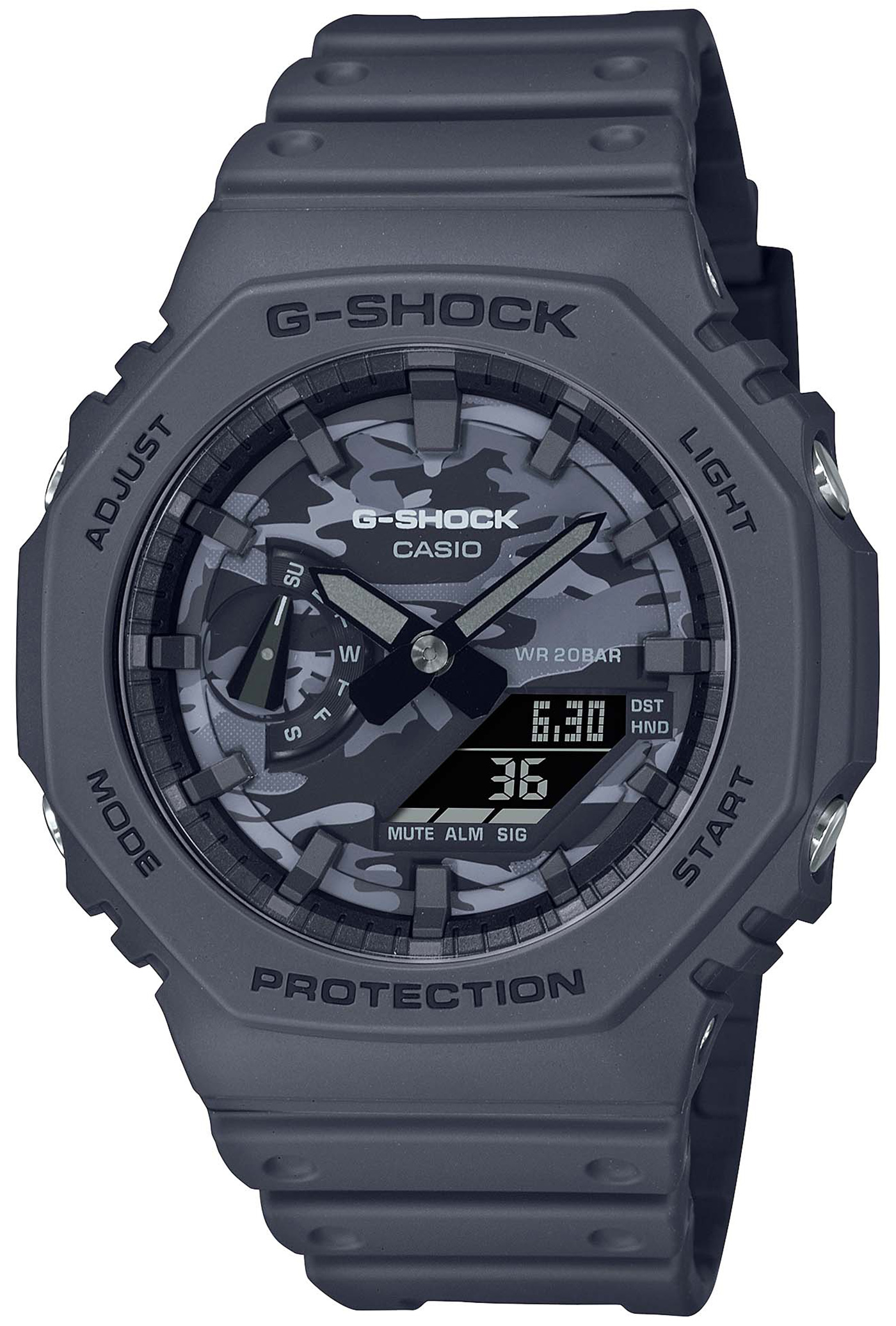 For those who prefer a sleeker, more refined look, the Casio G-Shock Digital Camouflage Utility Series also includes the Casio G-Shock GA2100CA-8A. The GA2100 has been a massive enthusiast hit for the brand in the past few years, thanks to its more streamlined design and distinctive octagonal “Casioak” bezel. For the GA2100CA-8A, the brand renders this 45.4mm resin case in simple black for a stealthy look in images. Polished stainless steel pushers add a touch of brightwork to the design when viewed from the case sides, while the black bezel text keeps the overall look restrained in images. Casio equips this model with its Carbon Core Guard structure, developed initially for the series’ more upscale offerings for an added layer of movement protection above the G-Shock’s already legendary durability. Water resistance for the GA2100CA-8A remains unchanged, however, with a solidly capable 200-meter rating.

Like the GA700-based models in the Casio G-Shock Digital Camouflage Utility Series, the dial of the GA2100CA-8A introduces its camo pattern through the main analog dial surface. For this model, Casio instead aims for a dark urban camouflage look with a four-tone mix of black and cool gray shades in images. When combined with the blacked-out dial hardware and the low-contrast medium gray lume fill for the heavily counterweighted sword hands, this familiar dial layout takes on an ultra-modern, tactical look in images that should make it the most adaptable watch in the lineup. Casio powers this model with the in-house Module 5611 ana-digi quartz movement. The Module 5611 provides the G-Shock line’s usual robust suite of complications, including LED dial illumination, a world timer, a 1/100-second split-seconds chronograph, five daily alarms, an hourly time signal, and a perpetual calendar. 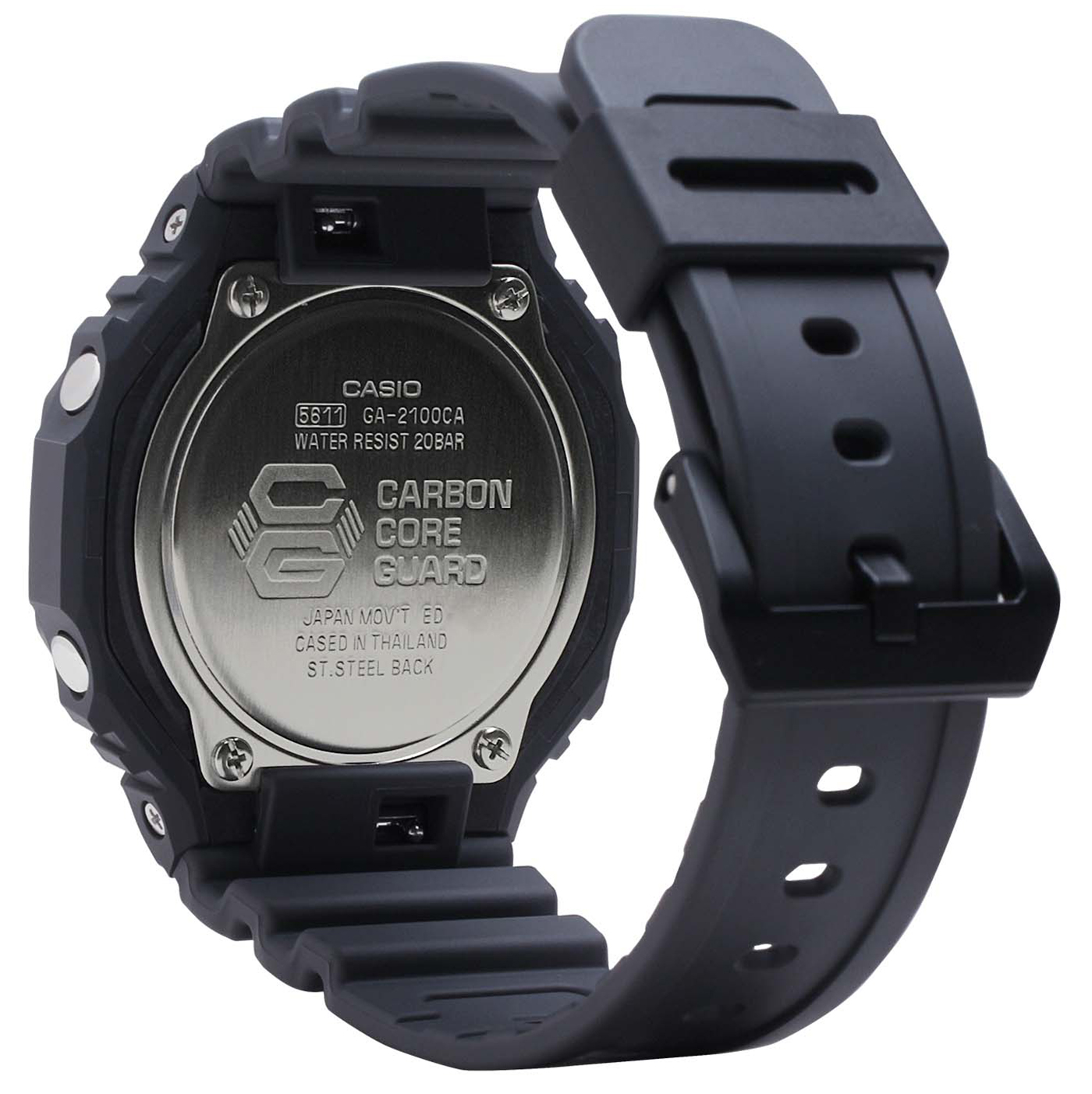 With bold camouflage accents, subdued military-inspired colorways, and three of the G-Shock line’s most popular case designs, the Casio G-Shock Digital Camouflage Utility Series should make for a stylish, streetwear-ready addition to the entry-level side of G-Shock. All models in the Casio G-Shock Digital Camouflage Utility Series are available for preorder now through the brand’s website and will become available through select authorized dealers and the G-Shock SoHo Store in February 2022. MSRP for each of the five models in the series stands at $99 as of press time. For more details, please visit Casio’s website.